The Universe Next Door Preview

THE UNIVERSE NEXT DOOR PREVIEW 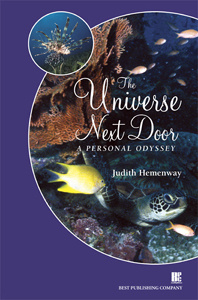 Flying:  Abruptly, on one of our forward zooms, the world fell out from under me. The entire reef disappeared in an instant. My heart leaped into my throat, my stomach flipped over twice, and my semi-circular canals went completely haywire. I was flying through deep blue space unbounded. Ahead, above, below, on either side, there was nothing visible but an intense and infinite dark blue expanse. The sensation of flying, of moving rapidly and weightlessly through space, was intoxicating! And disorienting. Without any reference points whatsoever, it was hard to tell how fast I was going, or even in what direction. I looked back and saw the drop-off of the reef rapidly flying forward to greet me. Jon was nearby, suspended over the abyss like myself. Reassured, we spent a few moments soaring back and forth, immersing ourselves in the sheer exuberance of flight, before reluctantly agreeing that it was time to begin working our way back toward the boat ….

The Thrill of the Hunt:  A 2-foot long Sheephead moseyed toward me, its large black head crowned by a prominent bump, the mark of a mature male. I had to hold the spear with both hands to keep it properly cocked as I waited for the fish to come near. As soon as it was within range, I released my grip and the pole shot forward, directly toward the side of the fish. It bounced off. A wave of exasperation swept over me as I realized that I didn’t have enough strength to shoot the spear effectively.

Without wavering, the fish continued to swim slowly past me, either completely oblivious to the threat of my presence or confident that I wasn’t a threat. I cocked the spear once more and released it. Again it bounced off. My frustration was climbing ever higher. But wait—the fish shuddered several times, tilted on its side, and sank motionless to the bottom. Apparently, it was more stunned than I was and it remained that way long enough for me to pick it up by the gills and secure it on Jon’s fish stringer. I was elated: I had achieved “first blood,” even though my victim not only wasn’t bleeding, but didn’t have a mark on him.

Boomerang!  As soon as we topped the pinnacle, the fierce current caught us and tried to drag us away. I grabbed hold of the anchor chain and narrowed my focus once more to concentrate on my grip. I felt a momentary panic as I thought about the 80 feet of water above me and the long, slow ascent I had to make. But my determination overruled the fear. I breathed deeply and began my hand-over-hand climb. Up and up I climbed along the chain, each link marking my progress. The pinnacle disappeared from sight and I was completely surrounded by the featureless dark blue depths.

Here There Be Dragons:  A large dark form was hurtling directly toward us at an amazing speed. I knew instantly it was a shark—a very large shark. And I knew exactly what it was doing.

The attack posture of a shark is unmistakable. The beast arches its spine, head and tail downward, lifting its triangular dorsal fin upward like a banner being borne into battle. Its two pectoral fins are stiffened and angled down and out, acting as forward rudders or stabilizers. It swims by thrusting its lowered head and tail in unison, first to one side and then to the other. Were any other fish to try such a movement, it would look awkward and ridiculous. When a shark does it, it looks lethal.

For a split second, a fragment of a childhood nursery rhyme rang in my mind: “There was a crooked man and he walked a crooked mile …” But in the next split second, my body and my mind froze and I watched helplessly for an eternity as the beast hurtled toward me, its twisted crooked movements somehow sinuous and remarkably graceful. Three feet from my faceplate it lifted its head—ah, those teeth! Its white belly sweeping up and over us, it circled to our right and barreled back out into the blue. I was stunned. I turned to look at Vicki. I could hear her screaming through her regulator and her wild eyes filled her mask behind her faceplate.

El Bajo:  I can hardly believe my eyes; as though in a dream I see a large manta ray close behind him, the graceful movement of its wings carrying it past him close enough that he reaches out and up and gently touches the very tip of its wing. I see that it does not flinch from the contact. The manta is now moving directly toward me and as it soars over my head I give a single kick of my fins and reach out. My gloved hand connects with the base of the animal’s left wing on the trailing edge, close to its body. Its skin is soft and leathery with a sandpaper finish that makes it easy to keep my grip. The manta is not startled but rather seems as though it has been expecting me. I feel it exert a surge of extra power that flows from its compact body out through the expanse of its wings, ‘digging in’ to adjust its stroke for the additional weight it now carries.

We glide across the reef. Time ceases. The beast and I are a single entity, connected and in harmony. There is no universe—only the rhythmic motion. Our wings rise and fall, rise and fall endlessly, and we are engulfed in the deep blue. My eyes are riveted to those huge wings, black above and creamy white below. We are nothing more than the power and poetry of those wings.