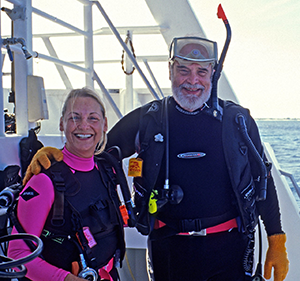 As a young child, Judy was afraid of the water until the fateful day her father picked her up and threw her, water wings and all, into the deep end of the pool. She immediately realized she had found her true element and hasn’t come out of the water since, except grudgingly to earn enough money to support her scuba diving habit.

She grew up in the farmlands of Pennsylvania with the inspiration of Hollywood classics such as Flipper, Sea Hunt, and 20,000 Leagues Under the Sea and began diving in 1973, shortly after she moved to Southern California and met her soon-to-be husband. Since then, she has completed roughly 1,500 dives, ranging from her home waters in California to such exotic locations as: Cozumel and the Turks and Caicos Islands in the Caribbean; Mexico’s Sea of Cortez and the Baja lagoons San Ignacio and Ojo de Liebre; the Melanesian island nations Fiji, Papua New Guinea, and the Solomons; the Polynesian Kingdom of Tonga; Malaysian Borneo; and most recently, the Indonesian island Sulawesi.

Until her retirement a few years ago, Judy maintained a career as a network security engineer in Southern California. Judy and her husband currently reside on several acres among the native oaks and rolling vineyards of the Central Coast with their gopher-hunting cat Francisco, his deer-patrolling German shepherd sidekick Dexter, and two rescued desert tortoises, Trumble and Flatty.

When she is not diving or writing about diving, Judy goes wine tasting with family and friends, cultivates California native plants, and of course plots where she will travel next. 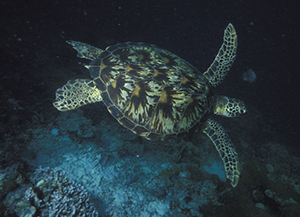 The Story of the Diving Turtle

In the traditional creation stories of the Algonquin and Iroquois Nations, the earth was originally completely covered with water, and only the sea creatures existed. After several failed attempts by various of these creatures, Turtle successfully dived down to the bottom and returned to the surface carrying some mud on her shell. As she swam, the mud expanded and formed the continents. This is why many Native Americans call North America “Turtle Island.”